Despite prior studies supporting the existence of “aggressive-victims”, it remains unclear if they possess unique risk factors from adolescents who are mostly aggressive or victimized. The present study sought to determine whether aggressive-victims differ from adolescents with distinct patterns of involvement in aggression and victimization in their social and emotional adjustment. Secondary analyses were conducted on baseline data from 984 seventh grade students (54% female) from three schools. Most participants identified their race as White (49%) or African American (19%), with 24% identifying as Latino/a. Latent class analysis identified four subgroups: predominant-aggressors (25%), predominant-victims (17%), aggressive-victims (12%), and limited-involvement (47%). The findings did not provide evidence of unique social-emotional characteristics of aggressive-victims that were not accounted for by their involvement in both aggression and victimization. Further evidence of unique differences in risk factors is needed to support targeted interventions for aggressive-victims. 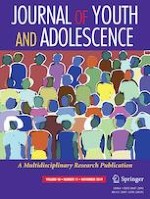 Daily Associations between Emotions and Aggressive and Depressive Symptoms in Adolescence: The Mediating and Moderating Role of Emotion Dysregulation

Does Negative Emotional Reactivity Moderate the Relation between Contextual Cohesion and Adolescent Well-Being?