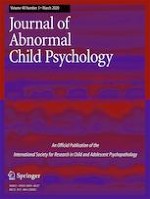 Discrepancies in Mother-Adolescent Reports of Parenting Practices in a Psychiatric Sample: Associations with Age, Psychopathology, and Attachment