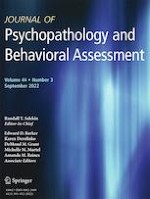 The Development and Initial Validation of the Adult Coping Inventory

Correction to: Irritability and Emotional Impulsivity as Core Feature of ADHD and ODD in Children

Prospective Associations Between Peer Victimization and Internalizing Symptoms in Adolescence: The Protective Role of Hope