Sluggish cognitive tempo (SCT) is marked by impairments across social, emotional, and academic functioning, but few studies have examined the association between SCT and neuropsychological functioning. The present study examined the associations between SCT and measures of processing speed, executive function, attention, and reaction time. From a larger sample of 8,238 children and adolescents, a subsample of 928 children were overselected for symptoms of SCT or attention-deficit/hyperactivity disorder (ADHD) and compared to a matched control sample of 652 individuals without elevations of ADHD or SCT (age range = 5.9–15.4 years). Multiple regression analyses revealed that symptoms of SCT were independently associated with deficits in nearly all domains assessed by a battery of neuropsychological assessments, including slower processing speed, poorer working memory, decreased inhibition, poorer vigilance, and increased reaction time. Further, weaknesses in all five of these domains remained significant even after symptoms of ADHD-inattention, anxiety, and depression were controlled. These findings add to literature that supports the validity of SCT as a symptom profile separate from ADHD-inattention symptoms.
vorige artikel Examining Maternal Elaborative Reminiscing as a Protective Factor in the Intergenerational Transmission of Psychopathology
volgende artikel Trajectories of Response to Treatments in Children with ADHD and Word Reading Difficulties 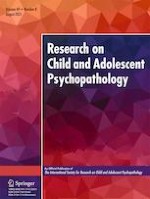 Levels and Instability of Daily Self-Esteem in Adolescents: Relations to Depressive and Anxious Symptoms