Sluggish cognitive tempo (SCT) appears to be distinct from attention-deficit/hyperactivity disorder (ADHD) and unique patterns of association between SCT and comorbid symptoms have been reported in the literature. The current study examined the relation between environmental supports and comorbid concerns among children with high SCT. Parents of children (ages 6–12) with a diagnosis of ADHD and clinically elevated SCT (N = 126) completed measures of emotional/behavioral functioning, child routines, and parental adjustment. Regression analyses revealed that after controlling for child age and parental adjustment, Household and Daily Living routines were associated with lower levels of externalizing symptoms while Discipline routines were associated with higher levels of these symptoms, accounting for nearly 20% of the variance in the equation. The findings suggest that for children with ADHD and high SCT routines may play an important role as an environmental support for externalizing symptoms. 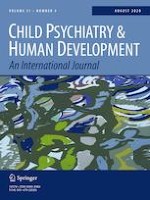 Profiles of Antisocial Behavior in School-Based and At-Risk Adolescents in Singapore: A Latent Class Analysis

Variants of Children with Psychopathic Tendencies in a Community Sample

How Do Mothers’ Parental Attributions Affect Child Outcomes from a Positive Parenting Intervention? A Mediation Study