Children with autism spectrum disorder (ASD) are at high risk for sleep disturbance and behavioral dysregulation. However, the relationships between these difficulties are not fully understood. The current study examined the relationships between specific types of sleep and behavioral problems among 81 children with ASD. Sleep problems were significantly associated with physical aggression, irritability, inattention, and hyperactivity. In multivariate analyses, distinct sets of sleep problems accounted for between 22 and 32 % of the variance in behavior problems across models. These results indicate that sleep disturbance is associated with behavioral dysregulation among children with ASD. Of note, night awakenings had the most consistently strong association with daytime behavior problems, even after controlling for the effects of age and sex. 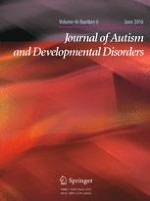 Reasoning on the Autism Spectrum: A Dual Process Theory Account

Factors Affecting Age at ASD Diagnosis in UK: No Evidence that Diagnosis Age has Decreased Between 2004 and 2014