While deficits in social interaction are central to autism, the sibling relationship has been found to provide a key medium for the development of such skills. Naturalistic observations of sibling pairs including children with autism and controls with Down syndrome were made across two time periods, twelve months apart. Consistent with the evidence on typically developing children, the amount and rate of initiations of both prosocial and agonistic interaction increased, but further analysis suggested that these interactions were stage-managed by the typically developing children. Results show social interaction and imitation in children with autism and the special role that sibling interactions can play. Longitudinal research on the acquisition of social skills in children with developmental disabilities is needed. 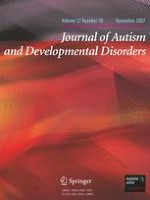 Impact of SMART Board Technology: An Investigation of Sight Word Reading and Observational Learning

Social Skills Development in Children with Autism Spectrum Disorders: A Review of the Intervention Research

Brief Report: Impaired Identification of Discrepancies Between Expressive Faces and Voices in Adults with Asperger’s Syndrome