Transcatheter atrial septal defect (ASD) and patent foramen ovale (PFO) closure might have opposite short- and long-term haemodynamic consequences compared with restricted interatrial shunt creation, which recently emerged as a potential treatment modality for patients with heart failure with preserved ejection fraction (HFpEF). Given the opposing approaches of ASD and PFO closure versus shunt creation, we investigated the early and sustained cardiac structural and functional changes following transcatheter ASD or PFO closure.

In this retrospective study, adult secundum-type ASD and PFO patients with complete echocardiography examinations at baseline and at 1‑day and 1‑year follow-up who also underwent transcatheter closure between 2013 and 2017 at the University Medical Centre Groningen, the Netherlands were included.

Atrial septal defect (ASD) is one of the most common adult congenital heart diseases, and the chronic left-to-right atrial shunt might eventually lead to the development of pulmonary arterial hypertension, arrhythmia and heart failure [1]. ASD closure is indicated at all ages, and closure of small ASDs and PFO can be indicated in cases of cryptogenic strokes or in divers with decompression illness [2]. However, older age at closure, male sex, comorbidities such as hypertension, diabetes mellitus and atrial fibrillation (AF), and larger ASDs may predispose to worse outcomes despite ASD closure [3‐7].
Recently, the artificial creation of a restricted interatrial shunt with a transcatheter device has emerged as a potential treatment modality for patients with heart failure with preserved ejection fraction (HFpEF) by means of reducing left atrial (LA) pressure [8]. Given the opposing approaches of ASD/PFO closure versus creation, as well as overlapping risk factors for HFpEF and worse prognosis of transcatheter ASD closure, we hypothesised that some patients undergoing ASD/PFO closure may display haemodynamic characteristics resembling HFpEF. We aimed to test this hypothesis by investigating the early and sustained cardiac structural and functional changes following transcatheter ASD/PFO closure using sequential echocardiograms and their clinical correlates.

Continuous variables are presented as mean ± standard deviation (SD) or as median with range. Categorical variables are expressed as frequency and percentage. Differences in echocardiographic characteristics between baseline versus 1‑day or 1‑year follow-up were compared using a paired t-test.
A linear regression model was used to evaluate the association between clinical risk factors of HFpEF and cardiac functional changes assessed by echocardiography. A multivariable model was created by including all variables in the univariable analysis. Stratified analysis was performed for the significant echocardiographic changes at 1‑day and 1‑year follow-up after transcatheter closure by ASD versus PFO. P values ≤ 0.05 were considered statistically significant.
All data analyses were performed using SPSS, version 22.0 (SPSS, Chicago, IL, USA).

In this study, we demonstrated early and sustained cardiac remodelling and functional changes following transcatheter ASD/PFO closure. In terms of structural changes, transcatheter ASD/PFO closure resulted in decreased RV and RA sizes and increased LV and LA sizes. In terms of functional changes, we found an acute and persistent decline in right heart function, with a parallel decline in both RV systolic and diastolic function. On the left side, transcatheter ASD/PFO closure resulted in early and sustained improvement in LV systolic function, but also in deterioration of LV diastolic function with an increase in echo-estimated LV filling pressure. The continuous increase in LV filling pressure was associated with older age and presence of AF, but not with ASD size, ASD versus PFO, sex or hypertension.
Focusing on right heart changes following transcatheter ASD/PFO closure, our results are consistent with those of some, but not all prior studies [4, 11‐14]. Similar to our findings, Stephensen et al. saw an acute decline in RV ejection fraction (RVEF) at day 1 following transcatheter ASD closure, which remained a decreasing trend till 12 months of follow-up [12]. On the contrary, Schoen et al. found improvement in RVEF by MRI in association with a reduction in RV systolic pressure [13]. We postulate that these divergent results are due to differences in study populations with respect to RV afterload. ASD closure is expected to normalise RV volume overload and thereby relieve the RV from its compensatory increase in RVEF to cope with the additional shunt volume.
In the absence of significant pulmonary hypertension, a reduction in RV volume with ASD closure may therefore be associated with a reduction in RVEF or RV systolic strain, albeit still within the normal range, as observed in our study and others [11]. Interestingly, in our study, RV functional changes after transcatheter closure were similar in ASD patients (with RV volume load) and PFO patients (without RV volume load) after subgroup analysis, suggesting RV adaptation following transcatheter ASD/PFO closure is a complicated process that is affected by more than volume overload and pressure afterload.
Conversely, from the standpoint of interatrial shunt creation in HFpEF, although it is as restrictive as a PFO, there is concern that the additional RV volume from the shunt may tip the right heart into failure, particularly in the presence of pulmonary hypertension from HFpEF itself. Furthermore, LV underfilling may occur following interatrial shunting from left to right. Notably, recent studies of interatrial shunt device in HFpEF have not reported these adverse effects, although it is important to bear in mind the strict inclusion and exclusion criteria applied in these trials (excluding significant pulmonary hypertension or RV failure), the restricted size of the iatrogenic PFO and the limited follow-up of patients receiving this relatively new treatment [8, 15‐20].
With regard to left-sided filling pressures, our findings regarding changes in LV diastolic function following ASD closure are consistent with those of prior studies. Ewert et al. found that transcatheter ASD closure in the elderly is associated with an increase in LVFP and subsequent congestive heart failure due to masked underlying LV diastolic dysfunction [21, 22]. We extended the prior data by including echo-tissue Doppler and strain measurements of LV and LA function. The E/e’ ratio is a widely accepted surrogate for LVFP estimation and proved to be associated with both haemodynamics and prognosis in patients with HFpEF [23, 24].
Likewise, LA reservoir GLS, as an additional reflection of LA myocardial compliance, emerged as a promising noninvasive surrogate for LVFP estimation [25]. Prior studies have shown an acute increase in LVFP, estimated as E/e’ ratio [26, 27], which is consistent with our results. Furthermore, the current study, in which we used a combination of mean E/e’ ratio, LA volume index and LA reservoir GLS, demonstrated that transcatheter ASD/PFO closure resulted in both an acute and sustained increase in LVFP. In addition, we found that older age and the presence of AF were independently related to sustained increases in LVFP. The important influence of age at ASD closure on changes in LVFP has been shown before; however, the influence of AF has not been extensively studied to date.

The major limitation of our study is the relatively small sample size, although we included consecutive patients with ASD and PFO undergoing transcatheter ASD closure with full echocardiographic datasets of diastolic function up to 1 year. The age difference between the current population and much elderly HFpEF patients is also a limitation to be speculated about. The current study results might underestimate iatrogenic ASD creation in much elderly HFpEF patients. We acknowledge that absolute changes were small and of uncertain clinical significance. Nonetheless, this is one of the first studies to comprehensively assess patients with strain echocardiography before and after ASD closure, and our findings may carry implications for the propensity to develop HFpEF after ASD or PFO closure or, conversely, the propensity to benefit from iatrogenic ASD creation in HFpEF.

Older patients and AF patients are predisposed to sustained increases in left-sided filling pressures following ASD or PFO closure. These findings support the concept that elderly HFpEF patients with AF in particular might benefit from the artificial creation of an atrial left-to-right shunt.
What’s new?

C.S.P. Lam is supported by a Clinician Scientist Award from the National Medical Research Council of Singapore; has received research support from Boston Scientific, Bayer, Roche Diagnostics, AstraZeneca, Medtronic, and Vifor Pharma; has served as consultant or on the Advisory Board/Steering Committee/Executive Committee for Abbott Diagnostics, Amgen, Applied Therapeutics, AstraZeneca, Bayer, Biofourmis, Boehringer Ingelheim, Boston Scientific, Corvia Medical, Cytokinetics, Darma Inc., Us2.ai, JanaCare, Janssen Research & Development LLC, Medtronic, Menarini Group, Merck, MyoKardia, Novartis, Novo Nordisk, Radcliffe Group Ltd., Roche Diagnostics, Sanofi, Stealth BioTherapeutics, The Corpus, Vifor Pharma and WebMD Global LLC; and serves as co-founder & non-executive director of Us2.ai. X. Jin, Y.M. Hummel, W.T. Tay, J.F. Nauta, N.S.S. Bamadhaj, J.P. van Melle, A.A. Voors and E.S. Hoendermis declare that they have no competing interests.
Open Access This article is licensed under a Creative Commons Attribution 4.0 International License, which permits use, sharing, adaptation, distribution and reproduction in any medium or format, as long as you give appropriate credit to the original author(s) and the source, provide a link to the Creative Commons licence, and indicate if changes were made. The images or other third party material in this article are included in the article’s Creative Commons licence, unless indicated otherwise in a credit line to the material. If material is not included in the article’s Creative Commons licence and your intended use is not permitted by statutory regulation or exceeds the permitted use, you will need to obtain permission directly from the copyright holder. To view a copy of this licence, visit http://​creativecommons.​org/​licenses/​by/​4.​0/​.
vorige artikel Twelve years of circulatory extracorporeal life support at the University Medical Centre Utrecht
volgende artikel Morning pulmonary artery pressure measurements by CardioMEMS are most stable and recommended for pressure trends monitoring
insite
INHOUD
share
DELEN 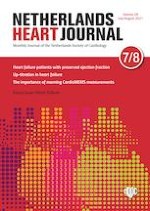 Clinical profile and contemporary management of patients with heart failure with preserved ejection fraction: results from the CHECK-HF registry