A growing body of literature has examined differences in the mental health and social support of abused women living in shelters compared with women from the community. However, less attention has been given to the differential effects of living in shelters and living with abusive partner in both mothers and children. A cross-sectional study was carried out to examine differences on cortisol awakening response (CAR), depression, anxiety and post-traumatic stress symptoms, and social support in a Portuguese sample of women living in shelter compared to women living with abusive partner. Mothers also reported on their children’s internalizing and externalizing symptoms.

The sample included 162 mothers and their children (4–10 years of age), of whom 81 were living with the abusive partner and 81 were living in shelters.

This study suggests that for women, shelter residence may be helpful for mental health and for significant improvements in perceived social support, but for children, the results seem to suggest that they are not benefiting from the time they spend at shelter. Future studies using samples from women in shelters need to evaluate if the services offered are suitable for children’s needs.
vorige artikel Children’s and Parents’ Perceptions of Vulnerability as Weakness: Associations with Children’s Well-Being
volgende artikel The Weight Status of Only Children in China: The Role of Marital Satisfaction and Maternal Warmth 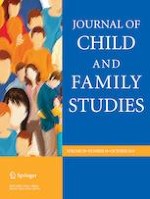 Implementing the Coping Positively with My Worries Manual: A Pilot Study

Children’s and Parents’ Perceptions of Vulnerability as Weakness: Associations with Children’s Well-Being

A Model of Parenting Risk and Resilience, Social-Emotional Readiness, and Reading Achievement in Kindergarten Children from Low-Income Families Model

The Experiences of Male Partners of Women with Postnatal Mental Health Problems: A Systematic Review and Thematic Synthesis