Identity-based conceptualizations of sexual orientation may not account adequately for variation in young women’s sexuality. Sexual minorities fare worse in psychosocial markers of wellbeing (i.e., depressive symptoms, anxiety, self esteem, social support) than heterosexual youth; however, it remains unclear whether these health disparities exclusively affect individuals who adopt a sexual minority identity or if they also may be present among heterosexually-identified youth who report same-sex attractions. We examined the relationship between sexual attraction, sexual identity, and psychosocial wellbeing in the female only subsample (weighted, n = 391) of a national sample of emerging adults (age 18–24). Women in this study rated on a scale from 1 (not at all) to 5 (extremely) their degree of sexual attraction to males and females, respectively. From these scores, women were divided into 4 groups (low female/low male attraction, low female/high male attraction, high female/low male attraction, or high female/high male attraction). We explored the relationship between experiences of attraction, reported sexual identity, and psychosocial outcomes using ordinary least squares regression. The results indicated sexual attraction to be predictive of women’s psychosocial wellbeing as much as or more than sexual identity measures. We discuss these findings in terms of the diversity found in young women’s sexuality, and how sexual minority status may be experienced by this group. 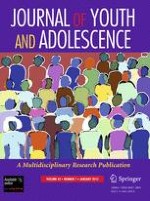 Not Worth the Fuss After All? Cross-sectional and Prospective Data on Violent Video Game Influences on Aggression, Visuospatial Cognition and Mathematics Ability in a Sample of Youth

Adolescent Academic Achievement and School Engagement: An Examination of the Role of School-Wide Peer Culture