Research on adolescent risk factors for delinquency has suggested that, due to genetic differences, youth may respond differently to risk factors, with some youth displaying resilience and others a heightened vulnerability. Using a behavioral genetic design and data from the National Longitudinal Study of Adolescent to Adult Health, this study examines whether there are sex differences in the genetic and environmental factors that influence the ways in which adolescents respond to cumulative risk for violent, nonviolent, and overall delinquency in a sample of twins (152 MZ male, 155 MZ female, 140 DZ male, 130 DZ female, and 204 DZ opposite-sex twin pairs). The results revealed that males tended to show greater vulnerability to risk for all types of delinquency, and females exhibited greater resilience. Among males, additive genetic factors accounted for 41, 29, and 43 % of the variance in responses to risk for violent, nonviolent, and overall delinquency, respectively. The remaining proportion of variance in each model was attributed to unique environmental influences, with the exception of 11 % of the variance in nonviolent responses to risk being attributed to common environmental factors. Among females, no significant genetic influences were observed; however, common environmental contributions to differences in the ways females respond to risk for violent, nonviolent, and overall delinquency were 44, 42, and 45 %, respectively. The remaining variance was attributed to unique environmental influences. Overall, genetic factors moderately influenced males’ responses to risk while environmental factors fully explain variation in females’ responses to risk. The implications of these findings are discussed in the context of improving the understanding of relationships between risks and outcomes, as well as informing policy and practice with adolescent offenders.
vorige artikel Adolescent and Parental Contributions to Parent–Adolescent Hostility Across Early Adolescence
volgende artikel Dual Trajectories of Gang Affiliation and Delinquent Peer Association During Adolescence: An Examination of Long-Term Offending Outcomes 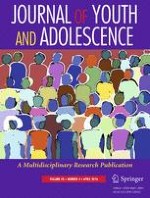 Shared Risk Factors for the Perpetration of Physical Dating Violence, Bullying, and Sexual Harassment Among Adolescents Exposed to Domestic Violence

From Violence in the Home to Physical Dating Violence Victimization: The Mediating Role of Psychological Distress in a Prospective Study of Female Adolescents