Sex differences were examined in 3-year-olds with autism spectrum disorders (ASD) ascertained from a high-risk cohort, and high- and low-risk comparison groups. Participants included 319 high-risk siblings and 129 low-risk controls. Eighty-five siblings were diagnosed with ASD, including 57 of 176 boys (32.4 %) and 28 of 143 girls (19.6 %), implying a relative odds of ASD of 1.65 in boys versus girls. There were modest sex differences on cognitive and adaptive skills and ASD symptom severity at age 3, but differences between boys and girls with ASD mirrored those in the non-ASD groups. The lower than expected male-to-female ratio, and the relatively high cognitive level among diagnosed children, suggest that we have identified an unanticipated number of higher-functioning girls with ASD.
vorige artikel Microglia in the Cerebral Cortex in Autism
volgende artikel Network Characteristics, Perceived Social Support, and Psychological Adjustment in Mothers of Children with Autism Spectrum Disorder 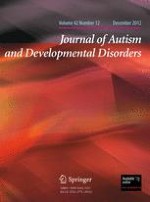 “Who Said That?” Matching of Low- and High-Intensity Emotional Prosody to Facial Expressions by Adolescents with ASD

Dialogic Linkage and Resonance in Autism