Many important differences in the presentation and clinical course of cardiac arrhythmias are present between men and women that should be accounted for in clinical practice. In this paper, we review published data on gender differences in cardiac excitable properties, supraventricular tachycardias, ventricular tachycardias, sudden cardiac death, and the utilisation of implantable defibrillators and cardiac resynchronisation therapy. Women have a higher heart rate at rest, and a longer QT interval than men. They further have a narrower QRS complex and lower QRS voltages on the 12-lead ECG with more often non-specific repolarisation abnormalities at rest. Supraventricular tachycardias, such as AV nodal reentrant tachycardia, are twice as frequent in women compared with men. Atrial fibrillation, however, has a 1.5-fold higher prevalence in men. The triggers for idiopathic right ventricular outflow tract tachycardia (VT) initiation are gender specific, i.e. hormonal changes play an important role in the occurrence of these VTs in women. There are clear-cut gender differences in acquired and congenital LQTS. Brugada syndrome affects men more commonly and severely than women. Sudden cardiac death is less prevalent in women at all ages and occurs 10 years later in women than in men. This may be related to the later onset of clinically manifest coronary heart disease in women. Among patients who receive ICDs and CRT devices, women appear to be under-represented, while they may benefit even more from these novel therapies.
vorige artikel ECG Changes in Subarachnoid Haemorrhage: A Synopsis
volgende artikel Treatment of Pacemaker-Induced Superior Vena Cava Syndrome by Balloon Angioplasty and Stenting 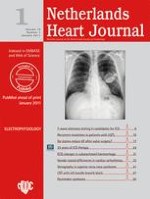