Baron-Cohen’s [(2002) Trends in Cognitive Sciences, 6, 248–255] ‘extreme male brain’ theory of autism is investigated by examining the relationships between theory of mind, central coherence, empathising, systemising and autistic-like symptomatology in typical undergraduates. There were sex differences in the expected directions on all tasks. Differences according to discipline were found only in central coherence. There was no evidence of an association between empathising and systemising. In the second study, performance on the Mechanical Reasoning task was compared with Systemising quotient and the Social Skills Inventory was compared with the Empathising Quotient. Moderate, but not high correlations were found. Findings are broadly consistent with the distinction between empathising and systemising but cast some doubt on the tasks used to measure these abilities.
vorige artikel Social Escape Behaviors in Children with Fragile X Syndrome
volgende artikel Brief Report: Use of DQ for Estimating Cognitive Ability in Young Children with Autism 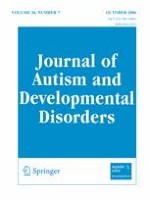 Comorbid Psychiatric Disorders in Children with Autism: Interview Development and Rates of Disorders