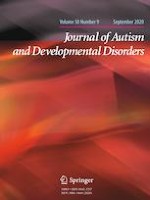 Piloting the Use of a Short Observation List for ASD-Symptoms in Day-Care: Challenges and Further Possibilities

Brief Report: Preliminary Feasibility of the TEDI: A Novel Parent-Administered Telehealth Assessment for Autism Spectrum Disorder Symptoms in the First Year of Life