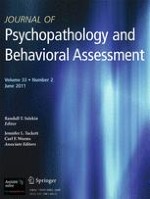 Separation and Traumatic Distress in Prolonged Grief: The Role of Cause of Death and Relationship to the Deceased

Systematic Review of the Clinical Presentation of Schizophrenia in Intellectual Disability

Reassessing the Assessment of Change in At-Risk Youth: Conflict and Coherence in Overall Versus Contextual Assessments of Behavior