The Beck Depression Inventory-II (BDI-II; A. T. Beck, R. A. Steer, & G. K. Brown, 1996) was administered to 164 biological mothers of sexually abused children to determine the psychometric characteristics of the BDI-II and to estimate the prevalence of self-reported depression in this population. The study also sought to ascertain whether the mothers’ BDI-II total scores were correlated with various psychosocial characteristics of the mothers and their children. It was found that there was only one dimension underlying the 21 BDI-II responses, and the internal consistency of the BDI-II total scores was high. Twenty-six percent of these mothers had scores indicative of clinical depression. The mothers’ BDI-II total scores were significantly correlated with their husbands’ or paramours’ having sexually abused their children and their ratings of the children’s internalizing behaviors. These results were discussed as supporting the use of the BDI-II with mothers of sexually abused children to measure self-reported depression.
vorige artikel The Behavioral Activation for Depression Scale (BADS): Psychometric Properties and Factor Structure 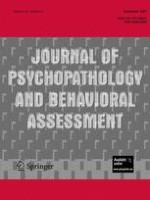 Mindfulness and Emotion Regulation: The Development and Initial Validation of the Cognitive and Affective Mindfulness Scale-Revised (CAMS-R)

Presentation of Mexican Americans to a Memory Disorder Clinic

Further Analysis of the Discriminate Validity of the Parenting Scale