The error-related negativity (ERN) is a negative deflection in the event-related potential (ERP) occurring approximately 50 ms after error commission at fronto-central electrode sites and is thought to reflect the activation of a generic error monitoring system. Several studies have reported an increased ERN in clinically anxious children, and suggest that anxious children are more sensitive to error commission—although the mechanisms underlying this association are not clear. We have previously found that punishing errors results in a larger ERN, an effect that persists after punishment ends. It is possible that learning-related experiences that impact sensitivity to errors may lead to an increased ERN. In particular, punitive parenting might sensitize children to errors and increase their ERN. We tested this possibility in the current study by prospectively examining the relationship between parenting style during early childhood and children’s ERN approximately 3 years later. Initially, 295 parents and children (approximately 3 years old) participated in a structured observational measure of parenting behavior, and parents completed a self-report measure of parenting style. At a follow-up assessment approximately 3 years later, the ERN was elicited during a Go/No-Go task, and diagnostic interviews were completed with parents to assess child psychopathology. Results suggested that both observational measures of hostile parenting and self-report measures of authoritarian parenting style uniquely predicted a larger ERN in children 3 years later. We previously reported that children in this sample with anxiety disorders were characterized by an increased ERN. A mediation analysis indicated that ERN magnitude mediated the relationship between harsh parenting and child anxiety disorder. Results suggest that parenting may shape children’s error processing through environmental conditioning and thereby risk for anxiety, although future work is needed to confirm this hypothesis. 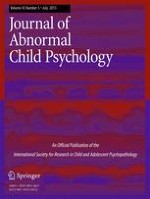 Test of “Facilitation” vs. “Proximal Process” Moderator Models for the Effects of Multisystemic Therapy on Adolescents with Severe Conduct Problem

Dispositional and Environmental Predictors of the Development of Internalizing Problems in Childhood: Testing a Multilevel Model