Depression in parents impairs parenting and increases the risk of psychopathology among their children. Prevention and intervention could be informed by knowledge of the mechanisms that break the inter-generational transmission of psychopathology and build resilience in both parents and their children. We used data from two independent studies to examine whether higher levels of self-compassion were associated with better parenting and fewer emotional and behavioral problems in children of parents with a history of depression. Study 1 was a pilot trial of mindfulness-based cognitive therapy that included 38 parents with recurrent depression. Study 2 was a longitudinal study that consisted of 160 families, including 50 mothers and 40 fathers who had a history of depression. Families were followed up approximately 16 months after the first assessment (time 2; n = 106 families). In both studies, self-compassion was assessed with the Self-Compassion Scale. Parents reporting higher levels of self-compassion were more likely to attribute the cause of their children’s behavior to external factors, were less critical, and used fewer distressed reactions to cope with their children’s emotions. Parents’ self-compassion was longitudinally associated with children’s internalizing and externalizing problems, but these associations became nonsignificant after controlling for child gender, parent education, and depressive symptoms. Future larger scale and experimental designs need to examine whether interventions intended to increase self-compassion might reduce the use of negative parenting strategies and thereby the inter-generational transmission of psychopathology. 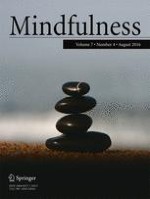 Why Being Mindful May Have More Benefits Than You Realize: Mindfulness Improves Both Explicit and Implicit Mood Regulation