Mindfulness meditation has both spiritual and secular foundations. Drawing on Jerome Frank’s concept of a healing “myth,” this study investigated the relative influence of spiritual and secular inductions to a brief mindfulness-based intervention. We hypothesized that, compared to narrower spiritual or secular presentations, an integrated role induction to mindfulness meditation would be more effective at improving the perceived credibility of, and expectations regarding, this practice, and hence would result in a subsequent mindfulness practice having a greater effect on state mindfulness and affect. We also hypothesized that there would be congruency effects between participants’ dispositional spirituality/secularity and their assigned induction group.

Participants (n = 179) were randomly allocated to one of three role inductions (spiritual, secular, or integrated); all then received the same brief, online, mindfulness intervention. Dispositional measures of secularity and spirituality were taken at baseline, and state measures of credibility and expectations, mindfulness and affect were taken at baseline, post-induction, and post-intervention.

Following attrition and screening for participation, data from 124 completers were analyzed. Participants improved across time on measures of credibility and expectations, state mindfulness, and negative affect. Contrary to the hypotheses, the integrated induction group did not improve more than the secular or spiritual groups, nor were congruency effects found. However, there was significantly less participant attrition in the integrated group than the other two conditions.

It is argued that a more broadly accessible “myth” may help more participants to persevere with mindfulness practice.
vorige artikel What Next After MBSR/MBCT? An Open Trial of an 8-Week Follow-on Program Exploring Mindfulness of Feeling Tone (vedanā)
volgende artikel Over-Identifying with Social Roles: Selfing Scale Development and Validation 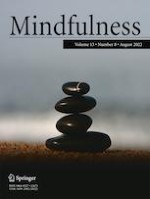 What Next After MBSR/MBCT? An Open Trial of an 8-Week Follow-on Program Exploring Mindfulness of Feeling Tone (vedanā)

Efficacy of Mindfulness-Based Interventions for Negative Symptoms in Patients Diagnosed with Schizophrenia: a Meta-analysis

Correction to: For Whom Do Meditation Interventions Improve Mental Health Symptoms? Looking at the Roles of Psychological and Biological Resources over Time