The online version of this article (doi:10.​1007/​s10862-013-9367-0) contains supplementary material, which is available to authorized users.
The work was carried out at the Psychiatric Services of the County of St. Gallen-North, Zurcherstrasse 30, 9500 Wil, Switzerland.

Dissociative disorders are frequent and clinically relevant conditions in psychiatric populations. Yet, their recognition in clinical practice is often poor. This study evaluated the performance of three well known and internationally used dissociation scales in screening for dissociative disorders. Consecutively treated out- and day care-patients (n = 160) from several psychiatric units in Switzerland completed the Dissociative Experiences Scale (DES), Somatoform Dissociation Questionnaire (SDQ-20), and Multidimensional Inventory for Dissociation (MID). The Structured Clinical Interview for DSM-IV Dissociative Disorders-Revised (SCID-D-R) was then administered. Test performance of the scales was analyzed by receiver operating characteristic curves. The diagnostic accuracy, represented by the area under the curve, did not differ significantly between the three summary scales. Cut-off scores for detecting at least 80 % of any dissociative disorder and dissociative disorder-not-otherwise-specified/dissociative identity disorder, respectively, were 12 and 20 for the DES, 30 and 33 for the SDQ-20, and 28 and 28 for the MID summary scale. The diagnostic accuracy of the DES subscale ‘absorption’ and the MID subscale ‘somatic symptoms’ was equal or slightly lower than the corresponding summary scale. The DES, SDQ-20, and MID summary scales are suitable in screening for dissociative disorders in general psychiatric out- and day care-patients. Adequate cut-off scores in the German-adapted DES are lower than in non-German versions. Screening with the DES subscale ‘absorption’ and the MID subscale ‘somatic symptoms’ could be more efficient without the loss of diagnostic accuracy. 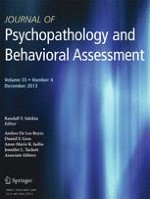 Behavioral and Psychophysiological Responsiveness During Child Feeding in Mothers with Histories of Eating Disorders: A Pilot Study

Age-Neutrality of the Trait Facets Proposed for Personality Disorders in DSM-5: A DIFAS Analysis of the PID-5

Psychometric Analysis of the Behavior Problems Inventory Using an Item-Response Theory Framework: A Sample of Individuals with Intellectual Disabilities