Response shift (RS) has been defined as a change in the meaning of an individual’s self-evaluation of his/her health status and quality of life. Several statistical model- and design-based methods have been developed to test for RS in longitudinal data. We reviewed the uptake of these methods in patient-reported outcomes (PRO) literature.

CINHAHL, EMBASE, Medline, ProQuest, PsycINFO, and Web of Science were searched to identify English-language articles about RS published until 2016. Data on year and country of publication, PRO measure adopted, RS detection method, type of RS detected, and testing of underlying model assumptions were extracted from the included articles. 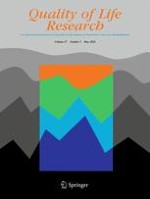 Correction to: Norwegian reference values for the Short-Form Health Survey 36: development over time

Health-related quality of life among US military personnel injured in combat: findings from the Wounded Warrior Recovery Project

Measuring health related quality of life (HRQoL) in community and facility-based care settings with the interRAI assessment instruments: development of a crosswalk to HUI3