On being told “John or Mary will come”, one might infer that not both of them will come. Yet the semantics of “or” is compatible with a situation where both John and Mary come. Inferences of this type, which enrich the semantics of “or” from an ‘inclusive’ to an ‘exclusive’ interpretation, have been extensively studied in linguistic pragmatics. However, the phenomenon has not been much explored in Autism Spectrum Disorders (ASDs), where pragmatic deficits are commonly reported. Here, we present an experiment investigating these inferences. We predicted that, as a result of the reported pragmatic deficits, participants with ASD would produce fewer inferential enrichments of “or” than matched controls. However, contrary to expectations, but in line with recent findings by Pijnacker et al. (Journal of Autism and Developmental Disorders, 39, 607–618, 2009), performances did not differ across groups. This unexpected finding is discussed in light of the literature on pragmatic abilities in autism.
vorige artikel Multi-Informant Predictors of Social Inclusion for Students with Autism Spectrum Disorders Attending Mainstream School
volgende artikel Constructs Assessed by the GARS-2: Factor Analysis of Data from the Standardization Sample 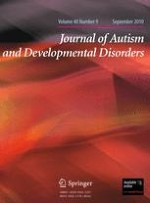 Improving Motivation for Academics in Children with Autism