The magnitude of gender identity-related disparities in school-based outcomes is unknown because of a lack of representative studies that include measures of gender identity. By utilizing a representative sample generalizable to a broader population, this study elucidates the size of gender identity-related disparities, independent of sexual orientation, in school experiences associated with school connectedness and perceptions of school climate. Additionally, the inclusion of and comparison to results of a large non-representative sample allows for more direct comparisons to previous studies of the school experiences of transgender youth. The analyses in this study primarily draw on a sample of 31,896 youth representative of the middle and high school population in California who participated in the 2013–2015 California Student Survey (a subsample of the California Healthy Kids Survey, which includes the largest known sample of transgender youth). Over half the sample identified their sex as female (51.3%), and 398 identified as transgender (1.0%). The sample was racially and ethnically diverse: 30.7% identified as multiracial, 33.0% as White, 11.1% as Asian, 7.4% as Black, and 52.9% as Hispanic. Findings from multilevel analyses show that relative to non-transgender youth, transgender youth were more likely to be truant from school, to experience victimization and bias-based bullying, and to report more negative perceptions of school climate, though did not differ in self-reported grades. The findings have implications for improving school policies and practices to create safer and more supportive school climates for all youth. 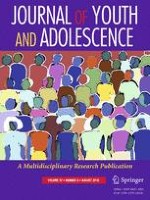 Different Kinds of Lonely: Dimensions of Isolation and Substance Use in Adolescence