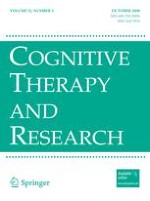 An investigation of appraisals in individuals vulnerable to excessive worry: the role of intolerance of uncertainty

The Effect of a Psychoeducational Course on Hypochondriacal Metacognition

Predictors of Response to Cognitive Behaviour Therapy in the Treatment of Schizophrenia: A Comparison of Brief and Standard Interventions