Previous research has shown that the formation of units or chunks contributes to sequence learning in serial reaction time (SRT) tasks (Koch & Hoffmann, Psychological Research 63:22–35, 2000). However, some of these results were assumed to be unrelated to sequence learning and to reflect preexistent response tendencies (Jiménez, Psychological Research 72:387–396, 2008). In the Experiment of this study, we aimed to evaluate this issue. One group of participants responded to a strongly structured sequence of digits by pressing one out of six response keys depending on digit identity. In a second experimental group, a weakly structured sequence was presented, which contained comparable transitions among the single items, but did not have series of ascending and descending triplets of successive digits. The results indicated that serial learning in general as well as response tendencies to certain fragments of the sequence were modulated by the manipulation of the strength of relational patterns. The data are consistent with the notion that relational patterns contribute to the formation of chunks as suggested in the original study. 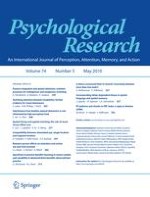 Spatial Stroop and spatial orienting: the role of onset versus offset cues

Between-person effects on attention and action: Joe and Fred revisited