The primary focus of classic cognitive behavioural therapy (CBT) for depression and anxiety is on decreasing symptoms of psychopathology. However, there is increasing recognition that it is also important to enhance wellbeing during therapy. This study investigates the extent to which classic CBT for anxiety and depression leads to symptom relief versus wellbeing enhancement, analysing routine outcomes in patients receiving CBT in high intensity Improving Access to Psychological Therapy (IAPT) Services in the UK. At intake, there were marked symptoms of anxiety and depression (a majority of participants scoring in the severe range) and deficits in wellbeing (a majority of participants classified as languishing, relative to general population normative data). CBT was more effective at reducing symptoms of anxiety and depression than repairing wellbeing. As a result, at the end of treatment, a greater proportion of participants met recovery criteria for anxiety and depression than had moved from languishing into average or flourishing levels of wellbeing. Given the importance of wellbeing to client definitions of recovery, the present results suggest a greater emphasis should be placed on enhancing wellbeing in classic CBT.
Extras
Supplementary material 1 (DOCX 14 kb)
Opmerkingen

Routine outcome data were collected on individuals being treated with high intensity CBT for depression and/or anxiety in the Somerset IAPT service between 2012 and 2017. Inclusion criteria for the IAPT service were being over 18 years of age and presenting with a primary problem of depression or anxiety that met IAPT clinical criteria at the point they were put on the waiting list (PHQ-9 > 10 or GAD-7 > 8). A subset of individuals no longer met these caseness criteria at the point they started treatment. Following national IAPT guidelines, participants were not offered treatment if they presented with comorbid psychosis, bipolar disorder; if drug and alcohol misuse was the primary presenting problem; if there was a moderate to severe impairment of cognitive function; and if they presented with a high level of risk to self or others that could not be safely managed in the service context. We extracted from the database the subset of data for clients who were allocated to high intensity CBT. South West Frenchay Health Research Authority granted ethical approval for the study (15/SW/0352, IRAS ID 163179). As patient data were anonymised and could not be linked back to individuals, patient consent was not required to access the data.

All analyses used two-tailed tests with an alpha of .05. The proportion of individuals scoring above clinical cut-offs for anxiety and depression at each time point was reported (using standard IAPT criteria of PHQ-9 scores > 10 and GAD-7 scores > 8). We also describe the proportion of individuals who were languishing, showing average wellbeing, and flourishing (scoring in the bottom third [< 47], middle third [47–57], and top third [> 57] of the general population distribution respectively). We used these cut-offs to determine the proportion of individuals at each time point who fell into each category in the Provencher and Keyes (2011) model of complete mental health. This is a two (symptomatic, asymptomatic in terms of anxiety and depression symptoms) by three (languishing, averaging, flourishing in terms of wellbeing) affective space. To allow a direct comparison of recovery rates for symptoms versus wellbeing, we compared the proportion of participants at each assessment point who met recovery criteria for symptoms (defined as scoring < 10 on the PHQ-9 and < 8 on the GAD-7) and wellbeing (defined as scoring in the average or flourishing part of general distribution; > 46) using McNemar tests for paired samples.
To analyse the extent of repair in each measure, we used two different analytic methods. If the same conclusions emerge across these different strategies, this suggests they are likely to be robust. First, paired sample t-tests were run on pre- and post- scores. We reported Hedges g (and its 95% confidence interval) as a measure of effect size for each analysis. Second, the importance of tracking individual level as well as group level outcomes is increasingly realised (Guidi et al. 2018). Therefore, the proportion of individuals showing reliable improvement and reliable deterioration on each measure from first to last session was calculated (cf. Jacobson and Truax 1991). Reliable improvement/deterioration was defined as an improvement/deterioration of more than 1.96 times the standard error of difference for the scale. We used the standard deviation estimates from the present sample and estimates of test–retest reliability from scale validation studies in these analyses. The proportion of reliable improvement/deterioration on each measure was compared using a series of pairwise McNemar tests.
Association between intake scores, change scores, and number of sessions were analysed using Pearson’s correlation coefficients (reporting simple r and attenuation corrected r).
There was a relatively high degree of missing WEMWBS data at the final session assessment, so analyses were run on both a complete case basis and a multiple imputation basis (to simulate missing values). This is because there is ongoing debate in the literature about how best to analyse data were there is a relatively high proportion of missing data, where there is reason to think data may be ‘missing not at random’ (MNAR), and where there is a limited pool of auxiliary variables to use to predict missing values (Jakobsen et al. 2017; Madley-Dowd et al. 2019; van Ginkel et al. 2019). If an identical pattern of findings emerges with both analytic approaches, this suggests that the bias inherent in either method is unlikely to have substantially contaminated the results. Imputation was conducted using a Markov Chain Monte Carlo (MCMC) algorithm, with 70 imputation runs (based on guidance that the number of imputations should exceed the percentage of missing data; White et al. 2010). All variables used in subsequent analysis models (intake and final-session WEMWBS, PHQ-9, and GAD-7) as well as auxiliary variables that might predict variables with missing data were included in the imputation model. Auxiliary variables were age, gender, ethnicity, sessions attended, intake score on the IAPT phobia scale, intake score on the Work and Social Adjustment Scale (WSAS; Mundt et al. 2002), and intake score on the Standard Assessment of Personality abbreviated scale (SAPAS; Moran et al. 2003). Multiple imputation analyses used pooled data across these 70 imputations. The imputed data set can be viewed as an intention-to-treat sample.

Wellbeing and Symptom Levels at Assessment

Table 2 reports intake and final session wellbeing, depression, and anxiety scores for participants (including both complete case and imputed estimates for final session data). The sample scored below the wellbeing general population levels (mean score of 33 compared to general population average of 51). 1707/1854 (92%) were classified as languishing; 125/1854 (7%) were classified as having adequate mental health; and 22/1854 (1%) were classified as flourishing (8% in total meeting recovery criteria for WEMWBS). Similarly, the sample had elevated levels of depression and anxiety at intake. 1724 participants scored above IAPT cut-offs for either GAD-7 (> 8) or PHQ-9 (> 10), while 130 met symptom recovery criteria. 622 participants (33%) were in the severe range for depression (PHQ-9 > 19) and 1020 participants (55%) were in the severe range for anxiety (GAD-7 > 14). The proportion of individuals meeting recovery criteria at intake did not significantly differ for symptoms versus wellbeing, McNemar test p = .178.
Table 2
Depression, anxiety and wellbeing at intake and final treatment session (n = 618 with complete data, 1854 with imputed data)
Data are mean (SD) values

This was a retrospective analysis of routine NHS outcome data, with the data being accessed in anonymised form. In the UK, such research does not require informed consent.

No animal studies were carried out by the authors for this article.
Open AccessThis article is distributed under the terms of the Creative Commons Attribution 4.0 International License (http://​creativecommons.​org/​licenses/​by/​4.​0/​), which permits unrestricted use, distribution, and reproduction in any medium, provided you give appropriate credit to the original author(s) and the source, provide a link to the Creative Commons license, and indicate if changes were made. 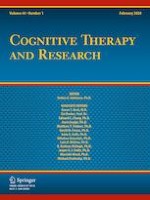