The major initial triaging decision in acute coronary syndrome (ACS) is whether or not percutaneous coronary intervention (PCI) is the primary treatment. Current guidelines recommend primary PCI in ST-elevation ACS (STEACS) and initial antithrombotic therapy in non-ST-elevation ACS (NSTEACS). This review probes the question whether this decision can indeed be based on the ECG. Genesis of STE/NSTE ECGs depends on the coronary anatomy, collateral circulation and site of the culprit lesion. Other causes than ischaemia may also result in ST-segment changes. It has been demonstrated that the area at risk cannot reliably be estimated by the magnitude of the ST change, that complete as well as incomplete occlusions can cause STE as well as NSTE ECGs, and that STE and NSTE patterns cannot differentiate between transmural and non-transmural ischaemia. Furthermore, unstable angina can occur with STE and NSTE ECGs. We conclude that the ECG can be used to assist in detecting ischaemia, but that electrocardiographic STE and NSTE patterns are not uniquely related to distinctly different pathophysiological mechanisms. Hence, in ACS, primary PCI might be considered regardless of the nature of the ST deviation, and it should be done with the shortest possible delay, because ‘time is muscle’.

The first author is a medicine student at Leiden University Medical Center, and performed this work in the setting of the scientific training part of her curriculum. This work was not funded. None of the authors have relationships relevant to the contents of this paper to disclose.
Open Access This article is distributed under the terms of the Creative Commons Attribution License which permits any use, distribution, and reproduction in any medium, provided the original author(s) and the source are credited.
vorige artikel Beta-blocking agents in cardiovascular disease; are they here to stay?
volgende artikel Image-guided intramyocardial cell injection: putting a puzzle piece in the right place
share
DELEN 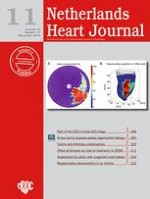 Close, but not close enough

Beta-blocking agents in cardiovascular disease; are they here to stay?

Recurrent repolarisation abnormalities in an athlete