Coronary revascularisation has been a topic of debate for over three decades in patients undergoing high-risk non-cardiac surgery. The paradigm shifted from routine coronary angiography toward stress test guided decision-making based on larger randomised trials. However, this paradigm is challenged by relatively newer data where routine coronary angiography and revascularisation is shown to improve perioperative cardiovascular outcomes. We review major studies performed over a long period including more contemporary data with regard to the 2014 American College of Cardiology/American Heart Association as well as 2014 European Society of Cardiology guideline on perioperative cardiovascular evaluation of patients undergoing non-cardiac surgery.

Cardiac risk stratification before any non-cardiac surgery is a common reason for a cardiology consultation. Despite the fact that current American College of Cardiology/American Heart Association (ACC/AHA) guidelines on perioperative cardiac evaluation indicate that coronary revascularisation before non-cardiac surgery should generally be reserved for patients who have an indication for it independent of the surgery, many more patients undergo coronary revascularisation in the preoperative setting, who would not undergo revascularisation otherwise [1]. These guidelines recommend the use of risk factor indices (such as the Revised Cardiac Risk Index (RCRI) and National Surgical Quality Improvement Program (NSQIP) risk calculator) and functional capacity of individual patients to guide further testing in preoperative evaluation in patients at elevated risk (>1 %) of perioperative major adverse cardiac events during planned non-cardiac surgery. On the other hand, European Society of Cardiology (ESC) guidelines recommend avoiding non-invasive testing in stable patients who have undergone coronary artery bypass graft (CABG) surgery within the last six years, based on the data from the Coronary Artery Surgery study [2, 3]. Based on various observational studies including the landmark study by Hertzer et al. in 1984, coronary revascularisation was associated with improved perioperative cardiovascular outcomes during non-cardiac surgery [4‐8]. As stress testing techniques were refined, further studies evaluated a stress test-guided approach to risk stratify these patients to avoid the risks associated with invasive angiography [9, 10]. As a result, over the years, most routine coronary angiography and revascularisation procedures were supplanted by stress test-guided procedures to a variable degree. However, despite their shortcomings relatively newer trials have shown conflicting results with the use of routine angiography [11, 12]. Nevertheless, a debate still exists regarding the interpretation and applicability of information derived from these trials, and many physicians still utilise individual practice patterns, rather than an evidence-based approach. The discordance between opinions of two cardiologists can be as high as 54 % [13]. Part of the reason could be lack of incorporation of some newer trial data into the guidelines. The purpose of this review is to delineate the pathophysiological basis of perioperative myocardial ischaemia as well as review contemporary studies on perioperative assessment with particular emphasis on revascularisation vis-a-vis the current ACC/AHA guidelines.

The pathophysiology of perioperative myocardial infarction (MI) is multifactorial. Surgery can induce a stress response in the body, with the release of pro-inflammatory and pro-thrombotic mediators that may predispose to platelet aggregation, plaque rupture, haemorrhage and subsequent infarction [14‐16]. In addition, intraoperative hypotension due to fluid shifts, blood loss anaemia, pain and tachycardia can induce oxygen demand-supply mismatch in patients with fixed perfusion defects [14, 15]. Perioperative pain triggers sympathetic pathways, which could also produce myocardial ischaemia, as evidenced by a study showing reduction in ischaemia with the use of morphine [17]. Finally, based on ‘normal’ coronary angiograms prior to surgery in patients with perioperative MI, the possibility of transient coronary thrombosis and vasospasm also exists [18].

Prolonged subendocardial ischaemia, as determined by episodes of prolonged ST-segment depression, has been associated with a vast majority of perioperative myocardial events [14‐16, 19]. These were exclusively non-ST-segment elevation MIs. In addition, the timing of preoperative MI seems to be greatest in the period immediately after surgery and emergence from anaesthesia [14‐16, 19]. Most troponin elevations occur within the first 12–24 hours after surgery [20]. This correlates with the period where tachycardia, alterations in blood pressure, pain and catecholamine response tends to be highest. A study involving vascular surgery patients showed reduced incidence of myocardial ischaemia if the heart rate was controlled strictly in the first 48 hours following surgery [21]. In a dog model with fixed coronary stenosis but without ischaemia at rest, sustained tachycardia triggered MI despite anticoagulation [22].

In an autopsy study on 26 patients with fatal perioperative MI, plaque rupture was discovered in half of the patients [23]. In a recent study involving 66 patients with perioperative MI, analysis of pre- and post-surgery coronary angiograms showed 54.5 % of infarctions to be from demand ischaemia, 25.8 % from thrombotic, and 19.7 % from non-obstructive coronary artery disease without any identifiable culprit lesion [24]. Another study reported by Dawood and colleagues showed perioperative MI to occur predominantly in patients with left main and triple-vessel disease [25]. The severity of the underlying stenosis did not appear to predict the site of the infarct. Similarly, Ellis and colleagues found high-grade stenosis to be an uncommon cause of perioperative MI [18]. They also reported viable myocardial areas with collateralised total occlusions to be the predominant site of perioperative myocardial infarctions. The extent of coronary artery disease (CAD) in terms of the number of arteries involved as well as luminal irregularities in the coronary arteries correlated with the risk of MI [18].

Compared with the 2007 ACC/AHA guidelines which heavily relied on the risk of surgery in determining the need for further testing in CAD patients with poor functional capacity, the 2014 guidelines incorporate both surgical and clinical risk using NSQIP and RCRI risk models [26]. It might be preferable to utilise both these risk models in a given patient, as RCRI alone may not perform well in predicting perioperative events in patients undergoing vascular surgery [27].

Impact of prior revascularisation

For patients with stable asymptomatic CAD who are not at high risk for perioperative cardiovascular events, current ESC guidelines do not recommend routine angiography if patients have undergone CABG in the past six years based on data from Coronary Artery Surgery Study (CASS) [2, 3]. The retrospective analysis of results from the CASS database involving 25,000 patients demonstrated that the protective effect of CABG is more prominent in patients with triple-vessel disease and/or low left ventricular ejection fraction for at least six years. Of note, these 3368 operations included a mix of abdominal, thoracic, vascular and head and neck surgeries.

In a retrospective analysis, Landesberg et al. found that patients who had moderate-to-severe ischaemia on preoperative thallium perfusion scanning and underwent coronary revascularisation had better long-term survival when compared with patients who did not undergo revascularisation [9]. In contrast to the CARP trial where only one-third of the enrolled patients had three-vessel CAD and all patients with left main disease were excluded, 73 % of patients in this retrospective trial had left main or triple-vessel CAD. In addition, it also compared patients with normal, mild, and moderately severe but fixed perfusion deficits and concluded that results on preoperative thallium scanning can predict perioperative mortality. On the other hand, all patients undergoing major vascular surgery underwent thallium scanning as a routine, rather than risk stratification and assessment of functional capacity. Age, type of vascular surgery, previous MI and presence of diabetes were independent predictors of mortality. In another retrospective study by the same group, patients with abnormal myocardial perfusion studies undergoing major vascular surgery were divided into low, intermediate and high-risk categories based on risk factors (age, diabetes, cerebrovascular disease, ischaemic heart disease, congestive heart failure, ST depression on pre-op ECG and renal insufficiency) [10]. As expected, patients in the intermediate and high-risk groups had worse survival; however, preoperative coronary revascularisation following an abnormal thallium scan improved long-term survival in the intermediate risk group only.
Recently, a retrospective analysis on 1104 patients was completed. It demonstrated that when compared with patients with non-revascularised CAD, patients who had undergone coronary revascularisation had a significant improvement in perioperative cardiac mortality [33]. However, overall mortality did not change with coronary revascularisation. This was mainly attributed to non-cardiac peripheral vascular adverse events.

In summary, the pathophysiology of perioperative MI is complex, and is attributable to both a primary coronary plaque disruption as well as a demand-supply mismatch triggered by the haemodynamic effects of surgery owing to a high catecholamine state. In patients with stable CAD and excellent exercise tolerance (>10 METS), current guidelines do not recommend further testing, while those with low or unknown functional capacity should undergo pharmacological testing if it will change the management in case of elective surgery. The jury is still out for patients with a moderate functional capacity (4-10 METS) [1].
What remains unclear is how the stress of surgery itself correlates with the described METS used to gauge functional capacity, given the varied mechanisms involved in perioperative myocardial ischaemia. Although functional capacity may predict the extent of oxygen demand-supply mismatch inducible by physical activity, what it fails to predict is the pro-thrombotic and pro-inflammatory changes in the perioperative period, which may contribute to cardiac ischaemic events. It is difficult to quantify the ‘stress’ that these factors may exert on the coronary vasculature and hence using functional capacity measurements by exercise capacity alone may be inadequate in predicting perioperative outcomes. In addition, the role of functional assessment of CAD by induced stress vs anatomical assessment using coronary calcium scoring has also been recently described. Patients with calcified atherosclerotic plaques even in the absence of inducible perfusion defects have shown an increased risk for adverse cardiovascular events [34]. It may be argued that atherosclerosis is a progressive process with multiple organ involvement; hence patients with significant atherosclerotic disease elsewhere, even in the absence of clinical symptoms of CAD, may actually have significant disease. Given these limitations of stress testing, preoperative angiography in high-risk patients (RCRI >3) undergoing elevated-risk surgery (NSQIP risk of MI and cardiac arrest >1 %) may be beneficial [35].
For patients determined to be at a low risk for major adverse cardiac events (NSQIP risk <1 %), it may be reasonable to proceed with surgery without stress testing and/or coronary angiography, with optimisation of medical therapy. On the other hand, in patients deemed high risk, especially those with poor functional capacity, future studies will need to address whether a selective strategy using a stress test first versus routine coronary angiography guided management could provide a more desirable perioperative outcome of low incidence of MACE. The next question is that based on coronary angiography, which patients would benefit from revascularisation: only those with multi-vessel disease, those with proximal left anterior descending artery or those requiring coronary bypass grafting. The answers to these questions remain debatable, hence the level of evidence is C (expert opinion) in the most recent ACC/AHA guideline when it comes to preoperative coronary revascularisation calling for further studies. What is interesting is that the latest ACC/AHA guidelines did not incorporate the data from relatively recent trials where routine coronary angiography was utilised [11, 12].
Nevertheless, based on the literature reviewed, the authors of this review would lean toward a lower threshold routine angiography and revascularisation as clinically deemed appropriate for high-risk patients undergoing high-risk surgery. In this scenario, although prior stress testing might be helpful, lack of inducible ischaemia may lead to underestimation of the potential risk and possible benefit of coronary revascularisation. Even though the primary endpoint was negative, patients undergoing ‘complete’ revascularisation derived perioperative benefit in the CARP trial [31]. For patients determined to be at intermediate risk, however, it may be beneficial to conduct stress testing followed by angiography and revascularisation if the test is moderately or severely abnormal. Inarguably, further large randomised controlled trials comparing routine coronary angiography versus the current ACC/AHA and ESC guidelines would help in caring for these complex patient subsets.

T. Rahat, T. Nguyen and F. Latif declare that they have no competing interest.
Open Access This article is distributed under the terms of the Creative Commons Attribution 4.0 International License (http://​creativecommons.​org/​licenses/​by/​4.​0/​), which permits unrestricted use, distribution, and reproduction in any medium, provided you give appropriate credit to the original author(s) and the source, provide a link to the Creative Commons license, and indicate if changes were made.
vorige artikel A longer life at the top of Mount Olympus?
volgende artikel Non vitamin K anticoagulation drugs will win the race
insite
INHOUD
share
DELEN 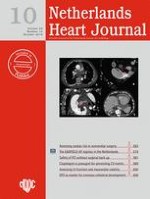