Recent scholarship has focused on the role of social status in peer groups to explain the fact that delinquency is disproportionately committed during adolescence. Yet, the precise mechanism linking adolescence, social status, and antisocial behavior is not well understood. Dual-taxonomy postulates a testable mechanism that links the sudden increase in risky behavior among adolescents to the social magnetism of a small group of persistently antisocial individuals, referred to here as the “role magnet” hypothesis. Using semi-parametric group-based trajectory modeling and growth-curve modeling, this study provides the first test of this hypothesis by examining physical violence and popularity trajectories for 1,845 male respondents age 11–32 from a nationally representative sample (54 % non-Hispanic White; 21 % non-Hispanic African American; 17 % Hispanic; 8 % Asian). Individuals assigned to a “chronic violence” trajectory group showed consistently lower average levels of popularity from 11 to 19. But, these same individuals experienced increases in popularity during early adolescence and subsequent declines in late adolescence. These findings are linked to current research examining social status as a mechanism generating antisocial behavior during adolescence and the consequences of delayed entry into adult roles.
vorige artikel The Effect of Music Video Clips on Adolescent Boys’ Body Image, Mood, and Schema Activation
volgende artikel The Effects of Media Violence on Anxiety in Late Adolescence 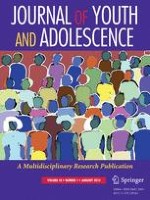