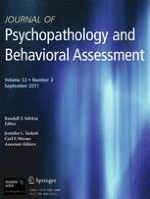 Emotional Functioning in Children and Adolescents with Elevated Depressive Symptoms

An examination of the Validity of the Elemental Psychopathy Assessment: Relations with Other Psychopathy Measures, Aggression, and Externalizing Behaviors