This review paper critically examines literature regarding restricted and repetitive behaviors (RRBs) in Autism Spectrum Disorder (ASD) and Obsessive–Compulsive Disorder (OCD). The similar behavioral profiles of these disorders presents the potential for confusion regarding diagnoses and intervention efforts. As such, this review highlights the similarities and differences between RRBs in ASD and OCD. The developmental trajectories of RRBs are presented, followed by an exploration of three constructs implicated in RRB manifestation: anxiety, executive functioning, and sensory phenomena. While RRBs tend to develop with some similarity in both disorders, the differing role of anxiety highlights important distinctions between ASD and OCD. We urge researchers and clinicians to think critically about the dimensions that affect RRB presentation. Future research should use this review as a starting point to further elucidate the differences between RRBs in these two populations.
vorige artikel Mapping the Frequency and Severity of Depressive Behaviors in Preschool-Aged Children
volgende artikel Tic Severity and Treatment in Children: The Effect of Comorbid Attention Deficit Hyperactivity Disorder and Obsessive Compulsive Behaviors 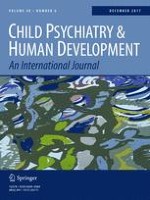 The Relations Between Maternal Prenatal Anxiety or Stress and Child’s Early Negative Reactivity or Self-Regulation: A Systematic Review

The Development of Severe and Chronic Violence Among Youth: The Role of Psychopathic Traits and Reward Processing