The electrophysiological correlates of cognitive deficits in tuberous sclerosis complex (TSC) are not well understood, and modulations of neural dynamics by neuroanatomical abnormalities that characterize the disorder remain elusive. Neural oscillations (rhythms) are a fundamental aspect of brain function, and have dominant frequencies in a wide frequency range. The spatio-temporal dynamics of these frequencies in TSC are currently unknown. Using a novel signal decomposition approach this study investigated dominant cortical frequencies in 10 infants with TSC, in the age range 18–30 months, and 12 age-matched healthy controls. Distinct spectral characteristics were estimated in the two groups. High-frequency [in the high-gamma (>50 Hz) and ripple (>80 Hz) ranges], non-random EEG components were identified in both TSC and healthy infants at 18 months. Additional components in the lower gamma (30–50 Hz) ranges were also identified, with higher characteristic frequencies in TSC than in controls. Lower frequencies were statistically identical in both sub-groups. A significant shift in the high-frequency spectral content of the EEG was observed as a function of age, independently of task performance, possibly reflecting an overall maturation of developing neural circuits. This shift occurred earlier in healthy infants than in TSC, i.e., by age 20 months the highest dominant frequencies were in the high gamma range, whereas in TSC dominant frequencies above 100 Hz were still measurable. At age 28–30 months a statistically significant decrease in dominant high frequencies was observed in both TSC and healthy infants, possibly reflecting increased myelination and neuronal connection strengthening with age. Although based on small samples, and thus preliminary, the findings in this study suggest that dominant cortical rhythms, a fundamental aspect of neurodynamics, may be affected in TSC, possibly leading to impaired information processing in the brain.
vorige artikel Measuring the Plasticity of Social Approach: A Randomized Controlled Trial of the Effects of the PEERS Intervention on EEG Asymmetry in Adolescents with Autism Spectrum Disorders
volgende artikel Electromyographic Responses to Emotional Facial Expressions in 6–7 Year Olds with Autism Spectrum Disorders 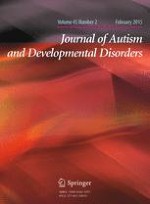 Tracking the Sensory Environment: An ERP Study of Probability and Context Updating in ASD