Anxiety and depression disorders are associated with significantly lower health-related quality of life (HRQL). The EQ-5D is a commonly used generic measure of HRQL; it captures mental health through a single domain—the anxiety/depression dimension. Evidence on the responsiveness of this measure in assessing changes in mental health changes is limited.

To examine the performance of the anxiety/depression dimension (A/D) of the 3- and 5-level (3L and 5L) versions of the EQ-5D in assessing changes in mental health.

Although the A/D of both EQ-5D-3L and 5L was limited in capturing changes in mental health in these populations, the 5L was slightly more responsive than the 3L. While the performance was better for depressive than anxiety symptoms, it varied by the direction of change. Further research using other measures of mental health in other populations is warranted.
vorige artikel Evaluation of the Fecal Incontinence Quality of Life Scale (FIQL) using item response theory reveals limitations and suggests revisions
volgende artikel Psychometric properties of the Chinese version of resilience scale specific to cancer: an item response theory analysis

Titel
Responsiveness of the anxiety/depression dimension of the 3- and 5-level versions of the EQ-5D in assessing mental health
Auteurs
Katelynn Crick
Fatima Al Sayah
Arto Ohinmaa
Jeffrey A. Johnson 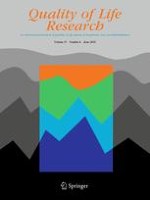