This study examined the role of callous-unemotional (CU) traits in preschoolers with externalizing behavior problems (EBP) and their response to time-out (TO). One hundred ninety preschoolers (76% boys, Mage = 4.92) with at-risk/clinically elevated levels of EBP participated in an 8-week summer treatment program (STP-PreK). Total number of minutes spent daily in TO for intentional aggression (IA) and repeated non-compliance (RNC) were recorded during the initial (T1) and final (T2) phases of the STP-PreK. After accounting for severity of EBP and levels of TO at T1, higher levels of CU traits predicted greater total levels of TO at T2. An interaction also emerged between symptoms of oppositional defiant disorder (ODD) and CU traits in predicting IA. Specifically, greater ODD symptoms predicted fewer number of IA related TO at T2, but only for children with low CU traits. Implications for treatment are discussed. 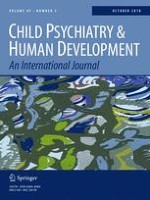 Changes in Emotional and Behavioral Problems Between 2000 and 2011 Among 16-Year-Old Polish Children: A Cross-Sectional Study

Do Callous–Unemotional Traits and Conduct Disorder Symptoms Predict the Onset and Development of Adolescent Substance Use?

Mechanisms Through Which Supportive Relationships with Parents and Peers Mitigate Victimization, Depression and Internalizing Problems in Children Bullied by Peers

Sensitivity to Peer Evaluation and Its Genetic and Environmental Determinants: Findings from a Population-Based Twin Study