This study examined whether language deficits persist even in children with optimal outcomes. We examined a group of children with prior diagnoses on the autism spectrum who had IQs in the normal range, were in age-appropriate mainstream classes, and had improved to such an extent that they were considered to be functioning at the level of their typically developing peers. Fourteen such children between the ages of five and nine were matched on age and sex with typically developing children, and were given a battery of 10 language tests to investigate their language abilities. Results indicated that while these children’s grammatical capabilities are mostly indistinguishable from their peers, they are still experiencing difficulties in pragmatic and semantic language.
vorige artikel Lexical Knowledge and Lexical Use in Autism
volgende artikel Report of Altered Urinary Oxytocin and AVP Excretion in Neglected Orphans should be Reconsidered 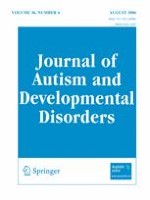 Focused Stimulation for a Child with Autism Spectrum Disorder: A Treatment Study

An Examination of Movement Kinematics in Young People with High-functioning Autism and Asperger’s Disorder: Further Evidence for a Motor Planning Deficit

A New Neurobehavioral Model of Autism in Mice: Pre- and Postnatal Exposure to Sodium Valproate

Lexical Knowledge and Lexical Use in Autism