» Toegang tot de volledige tekst krijgen
Belangrijke opmerkingen
The authors of this manuscript are part of the Connecticut Women's Health Project, a group with a shared research interest in the reproductive health of vulnerable women. 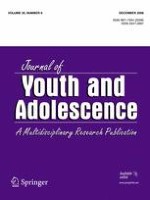 Structure and validity of people in my life: A self-report measure of attachment in late childhood

Resolution of Unwanted Pregnancy During Adolescence Through Abortion Versus Childbirth: Individual and Family Predictors and Psychological Consequences

Factors Associated with Physician Discussion of Health Behaviors with Adolescents