Repetitive thought processes have been implicated in vulnerability to both anxiety and depression. The present study used a prospective design to examine the ability of worry and rumination to predict these two forms of emotional distress over time. Participants were 451 college students (273 females) who completed self-report measures of rumination, worry, depression, and anxiety at two time points separated by 6–8 weeks. Results indicated that both worry and rumination prospectively predicted anxiety, whereas neither thought process prospectively predicted depressive symptomatology. Although females reported elevated levels of worry and rumination compared to males, gender did not moderate any of these effects. Based on these findings, it appears that repetitive thought in the form of both worry and rumination contributes to anxiety, whereas neither thought process contributed to the development of depressive symptomatology in the present sample. Post-hoc analyses raise the possibility that previously documented associations between rumination and depression may have been partially driven by criterion contamination between measures of these constructs (see J. E. Roberts, E. Gilboa, & I. H. Gotlib, 1998).
vorige artikel Rumination and Excessive Reassurance-Seeking in Depression: A Cognitive–Interpersonal Integration
volgende artikel The Personality Belief Questionnaire-Short Form: Development and Preliminary Findings 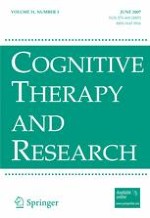 Attentional Focus During Repeated Checking Influences Memory but not Metamemory

Cognitive Bias in Men's Processing of Negative Social Information: The Role of Social Anxiety, Toughness as a Masculine Role Norm, and Their Interaction

Hopelessness Depression in Children: An Examination of the Symptom Component of the Hopelessness Theory