Rumination and worry are two types of repetitive negative thinking (RNT) that have been identified as risk factors for depression and anxiety, but it remains unclear whether the common (i.e., RNT) and/or distinct (i.e., temporal orientation and thought content) features of these thinking styles are associated with internalizing psychopathology. The goal of the current study was to represent rumination and worry with common and distinct components and test their associations to internalizing symptoms. Bifactor modeling was used to create common RNT, rumination-specific, and worry-specific factors in an emerging adult undergraduate sample (N=224) at the beginning of the academic semester. Structural equation modeling tested these factors as predictors of anhedonic depression and anxious arousal symptoms at the end of the semester. The common RNT factor was a predictor of later (but not change in) anhedonic depression and anxious arousal symptoms, while the specific factors did not show any consistent associations with either symptom dimension. These results suggest that the common process of RNT is the primary pathway through which rumination and worry are associated with risk for internalizing psychopathology. Clinical interventions that reduce RNT as a general thought process, rather than targeting specific thought content, may be effective.
vorige artikel More Likely to Have Risky Sex but less Sexually Satisfied: a Profile of High Social Interaction Anxiety, Urgency, and Emotion Dysregulation
volgende artikel The BASC-3 Behavioral and Emotional Screening System Student Form: Evidence for a Unidimensional Interpretation Among Chinese Youth 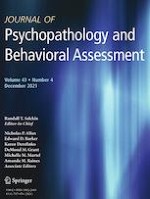