The association between autism and obsessive–compulsive disorder (OCD) seems largely dependent upon observed similarities in the repetitive behaviors that manifest in both disorders. The aim of this study was to use a network approach to explore the interactions between these behaviors. We constructed a network based on clinician’s perceptions as well as a network based on 213 clinically diagnosed children. In all networks, autism and OCD emerged as two distinct symptom clusters and obsessions and compulsions showed few direct associations with autism symptoms. Further, sensory interests were identified as behaviors that may contribute to the link between autism and OCD. Through network analysis, we expose the symptom pathways that may lead to the perceived association between autism and OCD. 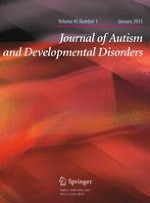 Erratum to: Reliability of the ADI-R for the Single Case-Part II: Clinical Versus Statistical Significance

Beyond Modularisation: The Need of a Socio-Neuro-Constructionist Model of Autism