This study examined the psychometric properties of the Spence Children’s Anxiety Scale for Parents (SCAS-P) in 1943 father-mother dyads and 1785 students. Results of confirmatory factor analyses for SCAS-P were in favour of the original model with six correlated factors. The internal consistency of SCAS-P was acceptable (α = .63–.91), and the test–retest reliability was acceptable (r = .46–.72). The convergent and divergent validity of SCAS-P was supported by significant correlations with an internalizing subscale to a greater extent than with an externalizing subscale. Congruent validity was supported by significant correlations between father and mother reports (r = .60–.71) and child and parent reports (r = .25–.42). Significant differences between community and clinical samples supported the discriminant validity. Adolescents showed higher anxiety levels than children, and girls showed higher anxiety levels than boys. Our findings suggest that the SCAS-P is a suitable parent instrument to measure child anxiety symptoms in Mainland Chinese children and adolescents.
vorige artikel The Role of Parenting Styles in the Relation Between Functions of Aggression and Internalizing Symptoms in a Child Psychiatric Inpatient Population 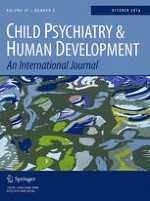 Hoarding in Children and Adolescents: A Review