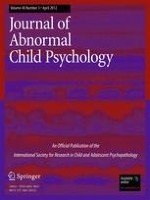 Is the Continuity of Externalizing Psychopathology the Same in Adolescents and Middle–Aged Adults? A Test of the Externalizing Spectrum’s Developmental Coherence

The Effects of Childhood ADHD Symptoms on Early-onset Substance Use: A Swedish Twin Study