Attitudinal ambivalence is characterized by conflict and indecision. Individuals differ in the extent to which they hold ambivalent attitudes, and this has recently been shown to be associated with mindfulness. Specifically, higher mindfulness was related to lower levels of ambivalence. The current study examined whether this relationship would be mediated by the clarity that individuals have about themselves (self-concept clarity, SCC). A close relationship between the self and attitudes has been documented in previous research, and the current study hypothesized (a) that high SCC would be associated with less attitudinal ambivalence and (b) that this association might account for the relationship between mindfulness and ambivalence. Participants of the current study (N‚ÄČ=‚ÄČ114) completed measures of mindfulness and SCC as well as an attitude survey asking them about various contentious issues (e.g., euthanasia). Results of linear mixed-effects model analyses showed that both higher mindfulness and higher SCC were associated with lower levels of attitudinal ambivalence. Moreover, bootstrapping mediation analyses showed that SCC mediated the association between mindfulness and ambivalence. Results suggest that mindfulness may foster self-knowledge and that clear self-knowledge may shield individuals from feeling too much conflict and indecision about various contentious issues.
vorige artikel Genetic Variation of COMT Impacts Mindfulness and Self-Reported Everyday Cognitive Failures but Not Self-Rated Attentional Control
volgende artikel Implicit or Explicit Compassion? Effects of Compassion Cultivation Training and Comparison with Mindfulness-based Stress Reduction 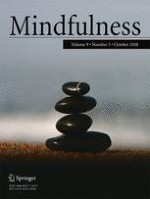 Time and Meditation: When Does the Perception of Time Change with Mindfulness Exercise?

A Study in Healing and the Mind

Brain Activity in Mindfulness Depends on Experience: a Meta-Analysis of fMRI Studies

A Matter of (Inner) Balance: The Association Between Facets of Mindfulness, Attention Deficit, and Postural Stability