This study aimed to provide a preliminary test of the efficacy of a brief cognitive bias modification program for reducing approach bias in adult smokers motivated to quit. Participants were 52 smokers who were randomly assigned to four sessions of approach bias modification training (AAT) or sham training. Participants were asked to make a self-guided quit attempt upon completion of the final training session. Approach bias was assessed at baseline and at the end of each session, and days abstinent was assessed 1-week following the quit attempt. Individuals assigned to the AAT training condition evidenced significantly greater reductions in approach bias relative to those in the sham condition (p < .001). Baseline approach bias did not moderate the between-group effect (ps > 0.41); however, higher levels of approach bias at baseline were associated with greater approach bias reduction over time irrespective of condition (p < .001). Consistent with hypothesis, the reduction in approach bias during the intervention period was significantly related to the number of days abstinent following the quit attempt (p = .033). The present study extends recent work in alcohol use disorders by showing that approach bias reduction, in this case for smoking-related stimuli, may also facilitate smoking cessation. Clinical and research implications are discussed. 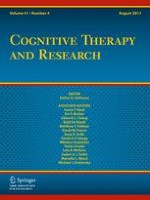 How Well Can We Measure Visual Attention? Psychometric Properties of Manual Response Times and First Fixation Latencies in a Visual Search Paradigm

Novel Assessment of Own and Ideal Body Perception Among Women: Validation of the Computer-Generated Figure Rating Scale

The Hopelessness Theory of Depression: Clinical Utility and Generalizability

Why Do People with OCD and Health Anxiety Seek Reassurance Excessively? An Investigation of Differences and Similarities in Function