Background. Arrhythmogenic right ventricular cardiomyopathy/dysplasia (ARVC/D) is an inherited cardiac disease with reduced penetrance and a highly variable expression. Mutations in the gene encoding the plakophilin-2 gene (PKP2) are detected in about 50% of ARVC/D patients. The p.Arg79X mutation in PKP2 has been identified in Europe and North America and has been functionally characterised. We evaluated the prevalence of the p.Arg79X mutation in PKP2 in the Dutch population.
Methods. Twelve index patients and 41 family members were evaluated in three university hospitals in the Netherlands. The diagnosis of ARVC/D was established according to the recently revised Task Force Criteria. Segregation of the p.Arg79X mutation was studied and haplotypes were reconstructed to determine whether the p.Arg79X mutation was a recurrent or a founder mutation.
Results. The p.Arg79X mutation in PKP2 was identified in 12 index patients. Haplotype analysis revealed a shared haplotype among Dutch p.Arg79X mutation carriers, indicating a common founder. Six index patients (50%) had a first- or second-degree relative who had died of sudden cardiac death below 40 years of age. At age 60, only 60% of the mutation carriers had experienced any symptoms. There was no significant difference in symptom-free survival and event-free survival between men and women.
Conclusion. We have identified the largest series of patients with the same desmosome gene mutation in ARVC/D reported to date. This p.Arg79X mutation in PKP2 is a founder mutation in the Dutch population. The phenotypes of PKP2 p.Arg79X mutation carriers illustrate the clinical variability and reduced penetrance often seen in ARVC/D. (Neth Heart J 2010;18:583–91.)
vorige artikel Peak longitudinal strain delay is superior to TDI in the selection of patients for resynchronisation therapy
volgende artikel A comparison between upfront high-dose tirofiban versus provisional use in the real-world of non-selected STEMI patients undergoing primary PCI 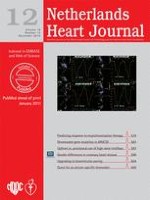