Although the reciprocal effects of parenting and child behavior have long been recognized, the emphasis of empirical study in the field of developmental psychopathology has been on parenting effects on children. For girls in particular, little is known about unique parenting effects on conduct problems in comparison to depression, or vice versa. In the current study, data from the large-scale (n = 2,451) Pittsburgh Girls Study were used to examine the reciprocal relations between parenting and child behavior over a six year period (child ages 7–12 years). Girls and their caregivers (85% of whom were biological mothers) were interviewed annually in their homes. Girls reported on symptoms of conduct disorder and depression, and caregivers reported on level of parent–child warmth and use of harsh punishment. The results of generalized estimating equation regression models demonstrated that both parenting behaviors were uniquely predictive of changes in girls’ conduct problems and depressed mood. When the effects of race and poverty on these associations were controlled for, both parenting effects on girls’ conduct problems remained significant, but only low parental warmth remained as a significant predictor of depressed mood. Girls’ conduct problems, but not depressed mood, predicted changes in harsh punishment over time. The small effect of girls’ depressed mood, on changes in parental warmth, was further weakened when socio-demographic factors were also included in the model.
vorige artikel Bidirectional Associations between Parenting Practices and Conduct Problems in Boys from Childhood to Adolescence: The Moderating Effect of Age and African-American Ethnicity
volgende artikel Reciprocal Relationships Between Parenting Behavior and Disruptive Psychopathology from Childhood Through Adolescence 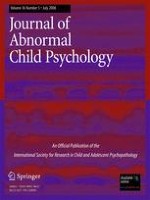 Bidirectional Associations between Parenting Practices and Conduct Problems in Boys from Childhood to Adolescence: The Moderating Effect of Age and African-American Ethnicity

Relationships Between Parental Negativity and Childhood Antisocial Behavior over Time: A Bidirectional Effects Model in a Longitudinal Genetically Informative Design