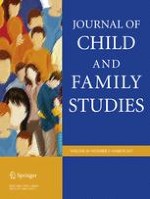 Characteristics of Parents of Children with ADHD Who Never Attend, Drop Out, and Complete Behavioral Parent Training