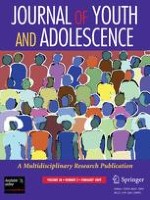 African American Adolescent Engagement in the Classroom and Beyond: The Roles of Mother’s Racial Socialization and Democratic-Involved Parenting