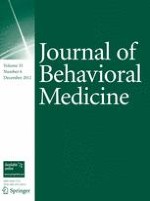 Predictors of adherence with self-care guidelines among persons with type 2 diabetes: results from a logistic regression tree analysis

Who benefits from psychosocial interventions in oncology? A systematic review of psychological moderators of treatment outcome

Correlates of hazardous drinking among Veterans with and without hepatitis C