» Naar de volledige tekst
Belangrijke opmerkingen
This study was sponsored by Pfizer, Inc. The phase III part of this study has been presented at the Annual Conference of the American Society of Clinical Oncology, Orlando (ASCO), FL, 2005 and the ASCO Gastrointestinal Cancers Symposium, Hollywood, FL, 2005.

Patients with measurable or evaluable advanced gastric cancer received IF weekly for 6/7 weeks or CF q4 weeks. QL was assessed using the EORTC QLQ-C30 at baseline, subsequently every 8 weeks until progression and thereafter every 3 months until death. The QL data were analysed using several statistical methods including summary measures and pattern-mixture modelling.

There was a trend in favour of IF over CF in time-to-progression. The IF group also demonstrated a better safety profile than CF and a better QL on a number of multi-item scales, suggesting that IF offers an alternative first-line platinum-free treatment option for advanced gastric cancer. 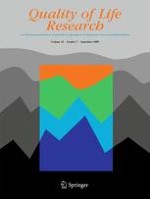 Development of a battery of instruments for detailed measurement of health status in patients with COPD in routine care: the Nijmegen Clinical Screening Instrument

Italian translation of the Manchester-Oxford Foot Questionnaire, with re-assessment of reliability and validity

Measuring pain in the context of homelessness

Quality of life from the perspective of adolescents with cerebral palsy: “I just think I’m a normal kid, I just happen to have a disability”